Congratulations to the six scientists in Portugal who have been awarded the prestigious Starting Grants by the European Research Council. Two of these grants were awarded to scientists working at research institutes that belong to the COLife alliance. Albino Oliveira-Maia of the Champalimaud Centre for the Unknown and Elias H. Barriga from the Instituto Gulbenkian de Ciência have been awarded Starting Grants by the European Research Council to advance their work in the fields of the neurobiology of food choice and cell migration, respectively. 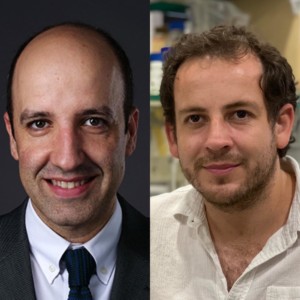 The European Research Council (ERC) has announced the list of winners of the 2020 Starting Grants. This is a highly competitive funding scheme that selects promising early-career scientists who have generated outstanding supervised work, and who have come up with exceptional research proposals. This list includes Elias H. Barriga, principal investigator at the Instituto Gulbenkian de Ciência, who was awarded 1.8€ Million, and Albino Oliveira-Maia, psychiatrist and neuroscientist at the Champalimaud Centre for the Unknown, who was awarded 1.5€ Million, and is the first practicing physician in Portugal to be recognised by this prestigious award.

Elias H. Barriga, principal investigator of the Mechanisms of Morphogenesis research group at the Instituto Gulbenkian de Ciência, studies directed collective cell migration, the coordinated motion of a group of cells travelling to their target tissues, guided by external signals. This migratory function is essential for a myriad of processes that range from embryonic development, to tissue repair and cancer metastasis. Regardless of its wide biological relevance the mechanisms that guide directional collective cell migration in the native environments remain unclear.

With the ERC Starting Grant, Elias, and his team, aim at better understanding how cells migrate in complex environments which are present in our bodies. Intriguingly, in such an environment cells need to constantly sense and respond to multiple biochemical and biophysical signals – however the interplay between these cues remains largely unknown.

“It is of particular interest to our research the mechanism by which biochemical and biophysical stimuli are integrated into a coherent directional and collective migratory behavior” explains Elias Barriga. With the ERC Starting Grant “our research group expects to contribute with unique perspectives to a wide range of fields, especially to the field of embryonic development and the study of congenital defects, as well as the field of cancer and regeneration”.

Albino Oliveira-Maia, director of the Neuropsychiatry Unit at the Champalimaud Centre for the Unknown, has been awarded an ERC Starting Grant to continue his ground-breaking exploration of the communication between the digestive and nervous systems.

Oliveira-Maia and his team have recently identified a digestive-brain axis that controls food choice in mice. Their work revealed a learning mechanism orchestrated by the digestive and nervous systems that leads animals to actively seek out certain foods.

In this new project, called CalorieRL, Oliveira-Maia and his team will be building on these findings to investigate food choice in humans. After all, if our gut is capable of telling the brain which food is more nutritious, why do we often not listen? How loud is this message, and is it more or less forceful amongst different individuals? It is hoped that the project will shed some light on how and why we choose the foods that we eat, which may go some way in the ongoing battle against obesity.

“With this opportunity to perform state-of-the-art measurements and analyses of behaviour and brain activity, both of which we will record simultaneously in humans, we will be able to expand our research programme on visceral control of food reward to answer questions that cannot be addressed in animal models”, Oliveira-Maia explains. “Performing some of these experiments in humans is expensive, but we expect that it will contribute more meaningfully to address relevant problems for human health and medicine.”